Gideon. As with most of these people, their stories are filled with crazy, supernatural stuff. Angels visiting, people testing God, battles begin fought. It all seems unreal to me. But yet it is real. And that is what strikes me. These people, especially Gideon, are normal people. And by normal, I mean normal-every-day-average-unremarkable people.

But before we get to the angel visit, the testing, or the fighting, we find Gideon hiding.

He was hiding from the enemy. Why? So they would not take his wheat. The enemy of Israel was oppressing Gideon and all of Israel. For seven years this was happening. The first 11 verses of Judges 6 give us the account. It was all the Israelites could do to stay alive. They hid in caves. Their crops and livestock were under constant attack. It was bad.

But that is what happens when, “Again, the Israelites did evil in the eyes of the Lord,”. God let the enemy invade and oppress.

Is the enemy of your soul invading and oppressing you? Are you doing evil in the eyes of the Lord? Just a thought.

Back to Gideon. He was in a winepress threshing some wheat. This picture shows an ancient winepress. The next one shows a threshing floor. 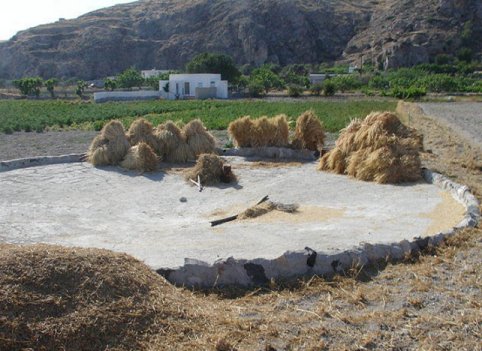 Note the difference. The threshing floor is an open area where the wind can blow easier (perhaps like the Holy Spirit?) . Gideon was in a winepress. He was trying to thresh the wheat in a secret place. Only fearful people do such things. Wheat was meant to be tossed into the air out in the open. This way, the wind could separate the wheat from the chaff. It is much more difficult if you are hiding in an enclosed space.

But that is what happens when doing evil in the eyes of the Lord. We are meant for one thing but we are doing another. Our actions are secret or hidden instead of being lived out. But if you are discouraged about that, the story is not over.

Verse 12 shows how God feels about Gideon. Here is the verse, “When the angel of the Lord appeared to Gideon, he said, “The Lord is with you, mighty warrior.”

Boom! Gideon was not a warrior, he was in a winepress! However, God feels differently.

Your surroundings should not dictate your status. Your circumstances do not negate your christianity. Your foes can’t take away your faith.

Gideon needed a supernatural reminder of his position. I think that you and I could use reminders now and again, don’t you?

Well consider this your reminder. God created you. You are a mighty warrior! Get out of your winepress and get to the business of God.

Have a victorious week. More on Gideon next time. God bless!

Good morning friends. Two questions for today. I will answer the first one for you.

Why do I blog?

People have asked me that before and my answers have not always been consistent. I have been blogging for two years now. In 2016, my schedule has been one post every week. Now I have a solid answer for that question.

The answer actually comes in a few parts so I hope you don’t mind if I outline them. It helps me to communicate better. =-)

B – Bible Dissemination – I love the Bible. It is God’s written word to us. More people would come to Jesus if they heard the Word more. I am trying to help that process.

O – Obey God – I  love God. God told me to write. Read the posts in My Haiti Experience to get the whole story. God said to write so here I am, writing!

G- Give Encouragement – I love to preach. In most of my posts, I try to encourage people. I trust that people do have hope when they are finished reading.

I am thoroughly enjoying this journey.

And who knows, this could just be the best two minutes of your day. =-)

Second Question: Why do you read this blog?

You know those shows. The ones that leave you hanging at the end of each episode? My wife and I are binge watching LOST right now. And let me tell you, almost every episode is a cliffhanger. It certainly wants you to keep watching!

And that is what got me thinking. We don’t watch much TV in our home. But we have been lately. And we are only on Season 2 of 6! Yes, we have been on a binge.

Normally, the word binge is something that is negative. People binge on food or alcohol. As you know, I struggled with a pornography addiction. There were times when I would binge on it. Binging is bad.

But what if we decided to binge on something good?

Why does it have to be bad to fill your heart, mind, and soul to the point where you are consumed with it? It consumes you. You think about it all the time. Your family and friends know all about it because that is all you talk about. You binge and binge because you can’t get enough. Simply, you are not satisfied.

Then God’s word came to mind. There are a few verses that specifically spoke to me.

Isaiah 40:28 “his understanding no one can fathom”

Ephesians 3:20 “to do immeasurably more than all we ask or imagine”

Philippians 3:12-14 “straining toward what is ahead”

Friends, these verses talk about God being bigger than we are. Paul was describing how he wanted more of God. And there was more to have. The prophet Isaiah was explaining that we could not comprehend God or his ways.

Genesis 1:1 “In the beginning, God created…”

The world was created by God! We can’t know Him fully! It just can’t happen.

Two thoughts I leave with you:

Dreams. Sometimes we dream silly dreams. Others can be scary or bizarre. But then there are times when the dreams are confusing.

On my part, I don’t dream too much. Daydream? Yes. But I don’t feel like I am a “dreamer”.

To be honest, dreams confound me. They are often close to reality but certainly not real.

But for today, I am not talking about my dreams but the dreams of a cocky teenager from the book of Genesis.

Joseph had some dreams. And as a 17 year old, he was not mature enough for the dreams to be fulfilled. His eleven brothers hated Joseph. He was the favorite. His dad gave him the best coat. Joseph was spoiled.

So his brothers took action. And if it was not for Reuben, Joseph would have been killed. Instead, being stripped of the robe, he was thrown into a pit, sold to merchants, and transported to Egypt.

All of these things might have confused Joseph. He had dreams after all! Had not the God of Abraham, Isaac, and Jacob given those dreams?!?! So why was he now ripped from his family and in captivity in a foreign nation?

But he works hard. Promotion. He is now making a life for himself. Then the temptations. Potipher’s wife. It has been said that opportunity knocks but temptation leans on the doorbell. This woman had it bad for Joseph.

But our cocky little dreamer has been growing up. He stayed true! Way to go Joseph!

And now back to prison. More hard work. More promotion. Dreams. And it was the dreams of the baker, cupbearer and even Pharaoh that eventually got Joseph out of prison.

Second in command of all of Egypt. Dude! These last few years have been rough, to say the least, but Joseph is finally in place. In place for what?

For the dreams to come true and be fulfilled.

Time does not permit me to go into the whole story. Please read it for yourself. It truly is one of the most amazing stories in the Bible.

I will conclude with a few thoughts about Joseph, the dreams, and God’s destiny.